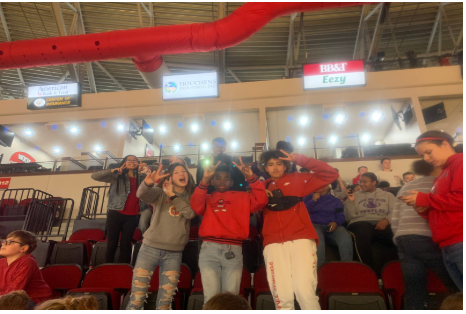 On January 9th, 2020, Bowling Green Jr. High attended the Western Kentucky University Women’s Basketball Team, and they played the University of Alabama. Every year WKU invites local schools to attend the Spread the Red Basketball Game. BGJHS students who met the PRIDE  expectations were invited to go to the game free of charge.

“This game gave people a chance to see their friends from different schools and to hang out with them,” said Deuce Bailey,  7th grader at BGJHS.

Deuce’s favorite player is Dee Givens, #4, forward for WKU. Deuce walked around with friends and watched the game.

“The concessions there were really high, like $15, and I ate shrimp,” said Deuce.

Kamdyn Patterson, a 6th grader at BGJHS, said, “T. C. Cherry, McNeil, Potter Gray and Moss were there, but there were more schools [too].”

Kamdyn said his favorite player is #4, Dee Givens. Kamdyn enjoyed watching the game, and he didn’t get up until halftime.

“The only time I got up was during halftime to get food. I would be glad to go back to one of those games, I was glad we got invited,” Kamdyn said.

“It was fun because I walked around with Demarcus Elliot,” said Demarr Starks, an 8th grader.

Demarr’s favorite player was #11 Alexis Brewer, 5’9, Guard. “I would want to go again because it will push me to do better for the next reward.”

Bowling Green Junior High School enjoyed the PRIDE reward trip and would love to take them on another one.